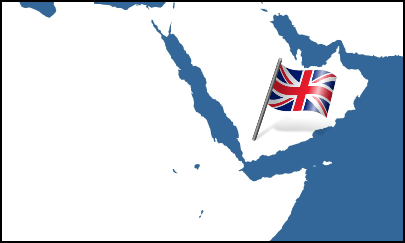 Aden is situated in Yemen in the Middle East.of British Officers with British weaponry.

The Aden emergency, as it is commonly known, was the product of pressure from Arab nationalists against British rule on the colony which had been in force since 1839.

On 10th December 1963 a state of emergency was announced after the National Liberation Front attacked the British High Commissioner with grenades as he was travelling back to London to begin talks about handing over power. Two people were killed but the Commissioner survived.

The South Arabian Federation became divided as the National Liberation Front (NLF) was formed in 1963 with support from Yemen and the Front of the Liberation of Occupied South Yemen (FLOSY) in 1966 supported by the Egyptian government. Despite both of these groups having the British as a common enemy they were also in conflict with each other. Both had very different ideas about control of the area  and when the British announced their intention to leave it spurred the groups on to push the British out sooner and to seize control of the area.

The British were careful to follow the “Rules of Engagement” which meant they would not attack places where there were women or children. Instead, the forces developed a more psychological approach and dropped leaflets warning of intermittent bombings.

Following the “Six Day War” between Israel and the Arabs, tension was running high with accusations that Britain had supplied Israel with weapons. The local Arab soldiers (SAA) mutinied, burned down their barracks and began firing on each other and the British. Afraid of retaliations the Arab police barricaded themselves into the camp in Crater and fired on the British. At the end of the long day of mutiny 22 British soldiers had been killed and the Arab rebels were in control.

In retaliation “Operation Sterling Castle” was launched to try to regain the base. Snipers killed Arab nationals holding the area and blockades prevented anybody from leaving or entering. They successfully regained secure control until the British left Aden later that year.

Although the British were able to prevent another uprising the unrest did not die down completely and in November 1967 the British left Aden and the NLF took over. Aden then took an economic downturn and as poverty spread there was political and economic unrest.

One Arab veteran who had fought against the British, Ahmed Mighali Said recalled “I am sorry about what happened. Under the British we had peace. The Yemeni fighters were ignorant. I hope that the British come back