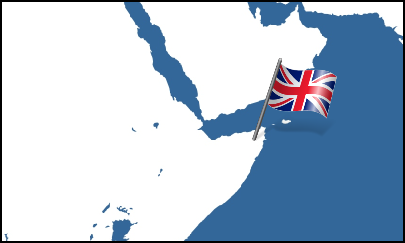 A counter insurgency campaign was fought here by the Sultan of Oman’s Armed Forces in 1965-1975 against guerrilla fighters of the Marxist Popular Front for the Liberation of Oman and the Persian Gulf (PFLOAG), supported by Communist South Yemen and several other Socialist states including East Germany. 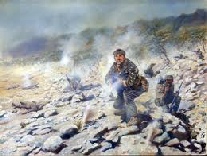 When a dispute began in 1964 between the tribes in Oman and their ruler, Sultan Said bin Tamur, the unrest was seized upon by the Soviet Union to help to spread conflict throughout the whole of the Arabian Peninsula.  The dispute rumbled on into the 1970s when Said bin Taimur’s son Qabus bin Said Al Said seized power in a military coup, aided by British army officers.

He then set about modernising the country, with assistance from Iran, India, Jordan, Pakistan and Saudi Arablia who wanted to ensure that Dhofar developed into peaceful nation rather than an unstable “people’s republic”. Guerrilla attacks continued to threaten internal security and with military support from friendly countries, it was hoped that the extremist activity could be halted. In 1973, troops and helicopters from Iran helped the Omanis to subdue the unrest. It was a slow victory but in December 1975, the sultan announced that the war had been won

Total Omani, British, and Iranian casualties during the final two-and-a-half years of the conflict were about 500.

Sultan Said ibn Taimur was ultraconservative and opposed to change of any kind. Kindled by Arab nationalism, a rebellion broke out in 1964 in Dhofar, the most backward and exploited area of Oman. Although begun as a tribal separatist movement against a reactionary ruler, the rebellion was backed by leftist elements in the PDRY. Its original aim was the overthrow of Said ibn Taimur, but, by 1967, under the name of the Popular Front for the Liberation of the Occupied Arabian Gulf–which in 1974 was changed to the Popular Front for the Liberation of Oman (PFLO)– it adopted much wider goals. Supported by the Soviet Union through the PDRY, it hoped to spread revolution throughout the conservative regimes of the Arabian Peninsula.

Said ibn Taimur’s reprisals against the Dhofari people tended to drive them into the rebel camp. In 1970, as the Dhofari guerrilla attacks expanded, Said ibn Taimur’s son, Qabus ibn Said Al Said, replaced his father in a coup carried out with the assistance of British officers. Qabus ibn Said, a Sandhurst graduate and veteran of British army service, began a program to modernize the country and to develop the armed forces. In addition to British troops and advisers, the new sultan was assisted by troops sent by the shah of Iran. Aid also came from India, Jordan, Pakistan, Saudi Arabia, and the Trucial Coast, all interested in ensuring that Oman did not become a “people’s republic.” An Iranian brigade, along with artillery and helicopters, arrived in Dhofar in 1973. After the arrival of the Iranians, the combined forces consolidated their positions on the coastal plain and moved against the guerrillas’ mountain stronghold. By stages, the Omanis and Iranians gradually subdued the guerrilla forces, pressing their remnants closer and closer to the PDRY border. In December 1975, having driven the PFLO from Omani territory, the sultan declared that the war had been won. Total Omani, British, and Iranian casualties during the final two-and-one-half years of the conflict were about 500…

The Dhofar rebellion combined economic grievances with political ideology. Placed in a regional context, Arab nationalism, the principal ideology of the 1950s and 1960s, indicted the conservative monarchs of the gulf and demanded their overthrow. Oman was susceptible to these populist stirrings, and, given Dhofar’s economic backwardness, it was a tinderbox. Dhofaris resonated with the Marxist ideology of the People’s Democratic Republic of Yemen (PDRY, also seen as South Yemen) during the late 1960s. The primary objective of the Omani liberation movement named the Popular Front for the Liberation of the Occupied Arabian Gulf (in 1972 renamed the Popular Front for the Liberation of Oman and the Arab Gulf and in 1974 further renamed the People’s Front for the Liberation of Oman) was the removal of Sultan Said ibn Taimur. The government’s policies and strategy after Sultan Qabus ibn Said’s ascent to power diffused much of this opposition. Pacification occurred through the dual strategy of carrot and stick–military pressure and economic rewards.

Qabus ibn Said engaged neighboring states, apprehensive of the growth of left-wing movements in the region, in dispatching economic and military assistance. In 1973 the shah of Iran, fulfilling his self-perceived role as guardian of the Persian Gulf following the departure of the British, dispatched ground forces (eventually numbering more than 3,000) and air units to Dhofar to assist the sultan. Oman received annual financial aid of about US$200 million from Abu Dhabi to assist military and civil development projects and about US$2.5 billion from Saudi Arabia, with which relations had improved. Britain, Jordan, Saudi Arabia, Egypt, and Pakistan provided training in military schools for armed forces personnel. The UAE and Jordan occasionally provided troop units for guard duty in the north, thereby releasing Omani units for service in Dhofar.

To erode the Dhofaris’ political will, Qabus ibn Said directed a disproportionate percentage of government revenues to the southern region. The shift was designed in part to augment military capabilities in the event of a resumption of hostilities and in part as economic appeasement. The construction of schools, hospitals, roads, and other infrastructure ameliorated the underprivileged status of the south.

Almost 25 percent of the approximately RO600 million (US$1.8 billion) allocated for development between 1971 and 1975 went to Dhofar to improve transportation, education, rural health, and religious facilities. This amount was spent on projects in Dhofar, although the population only numbered about 50,000, in comparison with the population of the rest of Oman of 400,000 in the mid-1970s.

The government also benefited from factionalization within the insurrectionary movement. The movement in the region had originally been organized in 1963 under the Dhofar Liberation Front, led largely by Arab nationalists and religious conservatives who could enlist support of tribal shaykhs in a common struggle against Sultan Said ibn Taimur. In 1968 the Marxists took over leadership, having the support of the PDRY, the Soviet Union, and China. Conservative Dhofaris broke with the movement, and when Qabus ibn Said seized power in 1970, many agreed to support him against the insurgency. By the mid-1970s, as many as 2,000 rebels had surrendered, been retrained, and incorporated into the Sultan’s Armed Forces (SAF) as pledged under the terms of the amnesty declared shortly after the 1970 coup.

The government based its new administration and distribution networks on preexisting tribal structures. The government established centers headed by local representatives, usually minor tribal leaders elected by the population of their respective districts but who had to be endorsed by the governor of Dhofar before assuming office. In the larger coastal settlements, local deputy governors managed the district administration independent of the governor of Dhofar. Most of these were major tribal shaykhs, who received a monthly stipend from the government and additional allowances, usually on state or religious holidays. The government’s financial allowances to the shaykhs, irrespective of whether or not the shaykh held an administrative position, served to ensure allegiance to authorities in Muscat. Two state institutions distributed these allowances: the finance section of the wali (governor) and the palace administration, popularly known as Diwan Affairs.