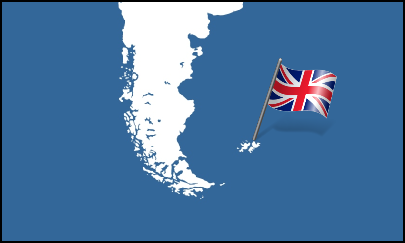 The Falklands Islands are situated in the South Atlantic Ocean near to the coast of Argentina.

The Falkland Islands were settled by Argentinean in 1826 but following a dispute over seal hunting a US warship was sent to the Islands. The US declared the islands free of government in 1831. Just one year later a British expedition landed, claimed the islands for Britain and threw out the Argentinean governor.  Although Argentina never acknowledged the British claim on the islands the population saw themselves very much as British. 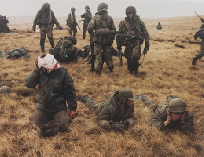 In 1982 there was a coup in Argentina and the new regime began plans to invade the islands. This was seen as a mission that would be met with little resistance but would result in a morale boost for the new government. On 28th March there were reports that 5 warships were spotted off the coast of South Georgia. The Royal Marines based on South Georgia were overwhelmed by invading Argentine troops on 2nd April and the islands of Sandwich and South Georgia were seized. The UN immediately called for a withdrawal and negotiations but this was refused.

The British Prime Minister, Margaret Thatcher took a very firm stand against the Argentines and Britain quickly put together a task force which set sail and landed in Georgia on 22nd April. The task force included the QE2, the P & O cruise liner Canberra and HMS Hermes. A 200 mile exclusion zone was declared around the Falkland Islands which meant that only British ships were allowed inside the zone.

The sinking of the General Belgrano by HMS Conqueror is one of the most controversial decisions of the Falklands War. 368 Argentine crew members lost their lives and more than 200 more were rescued when it was torpedoed 30 miles outside of the exclusion zone. Argentina then made the decision to launch an air war rather than risk any more ships.

Just 2 days later, on 4th May HMS Sheffield was hit by an Exocet missile which led to massive fires and smoke in which 20 men died and 26 were severely injured. This was the first major British casualty of the war and it shook the morale of the population at home.

The loss of HMS Ardent on 22nd May following fierce aircraft fire resulted in the loss of 22 personnel and saw acts of bravery including those of Seaman John Dillon who received a George Medal for rescuing a colleague, despite his own injuries. His Captain, Commander Alan West received a Distinguished Service Cross.

On 23rd May the frigate Antelope came under attack and was hit by two bombs, both of which failed to explode although they did considerable damage and killed one crew member. It was moved to more sheltered waters where two members of the Royal Corps of Engineers could attempt to defuse the bomb. The following day a time delay device caused one of the bombs to explode, killing Staff Sgt James Prescott and severely injuring Warrant Officer Phillips and sinking the ship, Prescott was posthumously awarded the Conspicuous Gallantry Medal.

The British now felt that the worst of the air attacks were coming to an end but on 25th May in a final push, the Argentines launched a fierce air strike. HMS Coventry and HMS Broadsword were positioned to deliberately draw fire away from other ships. Coventry was struck repeatedly and sank within minutes with a loss of 19 crew and 2 Chinese workers. Also lost that day was the ferry, the Atlantic Conveyor which had been converted to transport aircraft. The ship was hit by an Exocet missile which resulted in the loss of 12 servicemen and also 3 Wessex and 3 Chinook helicopters. The loss of the aircraft had a significant effect on the ability to move troops around in the land battle for the islands which followed.

Meanwhile, British troops landed near Port San Carlos and on 28th May they took Darwen and Goose Green with the loss of 17 men including Lt Colonel Herbert (H) Jones who was later awarded a Victoria Cross. 250 Argentines died during the battles.

Using the cover of low cloud, the British began a daring attempt to unload men and equipment at Bluff Cove as a preliminary to an assault on Port Stanley. After 2 days the operation was nearing completion when the cloud lifted and they were spotted and came under fire from enemy aircraft.

The landing ships Sir Galahad and Sir Tristram were both hit while attempting to transport men and helicopters to shore, a task that would have been carried out by the helicopters lost aboard the Atlantic Conveyor. Sir Galahad had been held up due to the poor weather and the 1st Welsh were still aboard. Both ships caught fire and the explosives and ammunition still aboard Sir Galahad made the fire much worse and resulted in the loss of 48 servicemen, 38 of them Welsh Guards. 55 servicemen were seriously injured, many with horrific burns. Helicopters rushed to the scene and their many acts of selfless bravery were recorded by news reporters and broadcast back to the UK

Closing in on Port Stanley the British secured the high ground at Mount Harriet, Two Sisters and Mount Longden on July 11th. The following day Mount Tumbledown was also captured. The Argentinean garrison in Port Stanley was taken and General Mario Menendez announced the surrender on 14th June. The British troops came down from the cold into the town. After 74 days the population of Port Stanley watched the troops raise the Falklands flag and were once again able to live under the Government of their choice.

The campaign cost 250 British lives with 3 civilian casualties. Approximately 300 British servicemen were wounded. Argentinean losses were 645 dead and missing and 11,845 prisoners of war were repatriated back to Argentina.