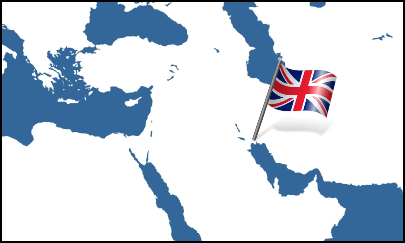 Iraq and Kuwait are in the Middle East. They both share a border with Saudi Arabia and the much smaller country of Kuwait runs down to the Persian Gulf.  Iraq also borders Jordan, Syria, Turkey and Iran.

The Iran/Iraq war had left Iraq with a massive amount of debt and over 20,000 of its people killed. Its main income came from selling oil and the war had a severe effect on their ability to produce and sell it. One of Iraq’s neighbours, the relatively small but oil rich country of Kuwait boosted its production. This caused the oil price to fall by 40%. In an attempt to control the oil price the Iraqi leader, Saddam Hussain planned to invade Kuwait. At first he asked for payment in land for Iraq defending the country during the Iran/Iraq war. He was confident that the politics of the Middle East would not be a concern to the International community. 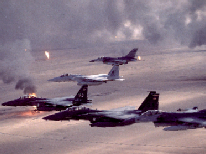 On 2nd August 1990 the invasion of Kuwait began. Saddam Hussain was mistaken about how other countries would react and immediately the US, Britain and Russia called for Iraq to withdraw from Kuwait.

Meanwhile, a British Airways flight en route from London to Kuala Lumpar in Malaysia stopped for scheduled refuelling in Kuwait airport. This put the passengers and crew right in the middle of a war zone. The passengers and crew were seized and sent to important sites around the country to act as a “human shield”. The idea was that the Allies wouldn’t be willing to bomb sites where they knew there were hostages. The hostages were all released unharmed after a few months but the shock and constant strain meant that one man died from a heart attack after his after his return home.

Saudi Arabia felt particularly vulnerable and despite asking for protection from the international community there was an attack on a Saudi oil refinery in January 1990. The Allies firstly launched a computer virus to disable the early warning capability of Iraq before beginning airstrikes on Baghdad. Iraq responded by sending SCUD missiles at both Israel and Saudi Arabia. The Allies were now committed to freeing Kuwait and stopping Saddam Hussain from his goal to grab oil rich land from his neighbours.

Flt Lt John Peters and his navigator John Nicol appeared on TV after their aircraft was brought down during an airstrike. When the world saw their appearance there was an outcry at their physical appearance. The Geneva Convention states that “no physical or mental torture, nor any other form of coercion may be inflicted on a prisoner of war. Their battered faces and the statements they gave, apparently under force, that the attacks were wrong gave concern that these rights were not being upheld.

On 29th January the Saudi city of Khafi was attacked but Iraqi troops were beaten back by Saudi and US forces.

On 23rd February the Allied ground offensive began and Kuwait city was freed 4 days later. It was largely undefended but pockets of resistance resulted in fierce fighting. As the Iraqi army retreated it operated a scorched earth policy, setting fire to the oil fields. Many of these burned for months and required experts to finally extinguish them. Allied forces chased the Iraqi soldiers to within 150 miles of Baghdad. Iraq accepted the conditions of the ceasefire on 3rd March. The war itself only lasted for 42 days although the build up had been very prolonged.