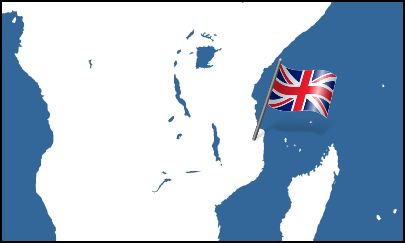 The Mau Mau uprising (1952-1960) happened in Kenya which is in East Africa. Kenya has one sea coast; the Indian Ocean. It is surrounded by neighbouring Somalia, Ethiopia, Sudan, Uganda and Tanzania.

Kenya was a British Protectorate and was very important for mining and growing crops in the rich soil. It also provided a valuable stop on the trade route to India after the Suez Canal opened.

The native Kikuyu people lost a great deal of their land to the British and this led to tension as it was needed for growing food and an important status symbol for families. 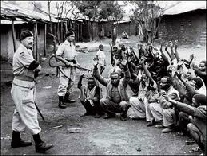 In WW2 there was a need to provide food for British citizens and troops so Kenya was required to grow a great deal more. Traditional methods were abandoned and intensive farming took over. This quickly exhausted the soil and left the local population hungry.

The Kikuyu had been poorly treated, forced to move away from their land and generally treated as second class citizens. They began to organise themselves and formed the Mau Mau Society to encourage people to promise to help their cause to get rid of the British. However, many members joined out of fear that they would be harmed if they refused. As many as 90% of Kikuyu people took the oath, many to avoid damage to property or even being burned to death.

The Mau Mau began a campaign of arson and burglaries but it wasn’t until the murder of Senior Chief Waruhui in 1952 that the British took the uprising seriously. They deployed troops and brought in a state of emergency on 21st October 1952. The Mau Mau responded by officially declaring a rebellion on 25th November 1952.

The following day Jomo Kenyatta, the president of the Kenya African Union was arrested along with nearly 200 more Mau Mau suspects.

In retaliation a series of bloody attacks were carried out on British settlers. In the months that followed thousands of arrests were made and Jomo Kenyatta was charged with ruling the Mau Mau.

In the next few years many lives were lost due to attacks on both sides. Settlers were killed and many people suspected of being part of the Mau Mau were rounded up and taken to detention camps. In 1954, Kikuyu land was cordoned off in an attempt to contain the rebellion but arson attacks continued, notably on Treetops Hotel where the future Queen Elizabeth and her husband Philip were staying.

On 24th April 1954, Operation Anvil was launched to gain control over Nairobi, the base of the Mau Mau society. The entire population were rounded up and taken to camps. In the chaos that followed many people were incorrectly detained as being part of the Mau Mau while others who were members were released. Unsurprisingly the rebellion did not diminish. The reserves where suspects were detained saw many breaches of basic human rights. Poor living conditions, disease, cruel treatment, torture and even murders were later recorded.

Sir Evelyn Baring, Governor General of Kenya offered a pardon to Mau Mau activists in return for an end to the uprising. This sparked outrage with white settlers. An attempt to find a solution was halted when two British schoolboys were murdered and members of the Mau Mau received the death penalty.

In 1959 the state of emergency officially ended and the Kenyan Constitutional Conference took place in 1960. African nationalists agreed to participate in a Kenyan government in return for the release of Jomo Kenyatta at the age of 71. In May 1961Kenyatta was elected as Prime Minister and in 1963 Kenya became the 34th African state to gain independence. In 1964 Kenya became a republic with Kenyatta as its first president.